Featured Image: Up close and personal on the edge of the CN Tower [Source: CN Tower]

64. Walk the edge of the CN Tower. Yep…I’m gonna be all up on the top of one of the tallest buildings in the world, walking on the edge. That’ll be 102.3 times better than walking on the glass ledge at the Sears Tower.

Aside from the film festival, one of the highlights of last year’s trip to Toronto was completing one of the most mentally challenging items on my bucket list: the CN Tower EdgeWalk. Less than 24 hours after my arrival in T-Dot, I found myself walking around the edge of the tallest free-standing structure in the Western Hemisphere. Take a moment and ponder that over. The CN Tower is taller than the Sears Tower, the Empire State Building, the John Hancock Center, and the Trump International Hotel & Tower…all places where I’ve been really high up in over the course of my North American adventures. But never mind the fact that I found myself at a height higher than those domestic facilities, I was outside.

When the trip to Toronto for TIFF 2013 was conceived in my mind, thoughts of the EdgeWalk popped into my head. I mean, it is one of the 75 items on my bucket list. Believe it or not, I was very hesitant to commit to doing it on this go around. It was mid-September and I’d be outside over 1100 feet in the air with the wind off of Lake Ontario rushing right at me…all while walking the edge of a tower. The perfect conditions to do this would definitely be the heart of summer but it wasn’t summer and who’s the say if I’d ever venture into Toronto in the summer months. So, as I waiting in Hartsfield-Jackson International Airport for my flight up to Toronto, I booked myself for EdgeWalk at a cost of $197CAD. I was locked in for a September 13th slot. To add even more intrigue to that, it was a Friday as in Friday the 13th.

I was scheduled for 10:30am so I arrived a full hour earlier. Once I checked in with the staff, I took a seat in the waiting area. I spent all of that time getting my mind right in regards to the occasion. Yeah, it would be a fun, exhilarating experience but it’s also high-risk at the same time. Until Item 5 on the bucket list—skydiving—is completed, this would represent the most dangerous of things I’ve ever done, regarding my personal safety. As I sat in the waiting area, I was soon joined by a number of other people…a married couple, a family of 4, and a boyfriend-girlfriend couple. Of those 8, 4 were to join me on the EdgeWalk: Zeke, Puja, Jimmy, and Marla.

When the clock turned 10:30am, we were all called into the prep area. It was full of all of the equipment needed to get through the experience. The prep staff helped us into the jumpsuits. They made sure everything was tight…and I mean everything. I felt slimmer than the 163 pounds I already weigh the way that jumpsuit squeezed my body. We all had to consent to a Breathalyzer among other safety measures. They got us all strapped into the safety harness devices, made sure our shoes were tied beyond normal standards, and checked us all over for loose items that could pose as safety hazards to us in the sky. They did maybe 5 checks on our equipment. The prep took about 35 minutes and once we were all cleared, the only thing left was to wait on our guide. As we waited for her, the feelings of nervousness overwhelmed all of us. Our guide was Jenny. She was British, easily identified from her accent. Jenny put us all at ease by first telling us that we were her 2nd group of the day after having done 5 the day before. That relaxed me a lot. I mean, if she did 5 tours the day before and just finished another one less than an hour before she got to us and she’s still breathing, I figured I was in good hands. She checked us all over once more to make sure the safety harnesses were tight and off we went to the elevator. About 50 seconds later, we were standing in a corridor. In this corridor, we all got individually hooked up to the overhead safety railings. All that was left was walking outside to the edge.

Once we got the clearance to go outside, I was the 2nd one out…didn’t want to be first and didn’t want to be last. It was when we got outside and I saw Toronto from up high with Lake Ontario right there and the wind blowing in my face that I literally had one of those Oh $#!+ moments. It hit me that this whole thing was real…we were outside, on top of the observation deck of the CN Tower, 1168 feet above the ground standing on a steel grated platform that was only 5 feet wide. The first thing we did once we were out there was Toes Over Toronto. It was an easy activity that consisted of us walking to the edge of the platform with our toes hanging off while looking down and waving our hands. I’ll be honest: I was scared. But when I got to the edge and let go of the rope that connected my harness to the overhead safety railings, I felt at ease a little bit because I didn’t blow away into Lake Ontario or onto one of the streets below. Immediately after that activity, we did the Lean Back. With our backs turned to the edge of the platform, this activity consisted of us crouching as if we were sitting in the harness, walking backwards until our heels were off the edge, and then leaning back until our legs were full stretched out. The cherry on top of this activity was waving our hands in the air while looking down. It was after completing this activity that I trusted the equipment and the danger intensity on the Juan Thrill Scale lowered from 10 to like 5. After that activity, we walked around the side a few feet and talked about the sights, which included the Toronto Islands. I could see the Billy Bishop Airport and the edge of the nude beach. We ended up stopping on the east side of the facility and it was like a total climate change. The temperature dropped maybe 15 degrees and the wind picked up exponentially. It was in that wind that we did the final activity, the Lean Forward. This activity consisted of us walking just inches close to the edge, where we would then lean forward into the rope and extend our arms out. It was probably as close to my Leonardo DiCaprio “I’m the king of the world” moment from Titanic as I’ll get anytime soon. After the final activity, we did some more walking around the edge of the facility and got pictures taken.

And just like that, in only 34 minutes, I walked around the edge of the CN Tower. In the process, I tied a Guinness World Record for Highest External Walk on a Building. I got a certificate of completion, a CD of photos, and a DVD of the occasion. Check it all out below. 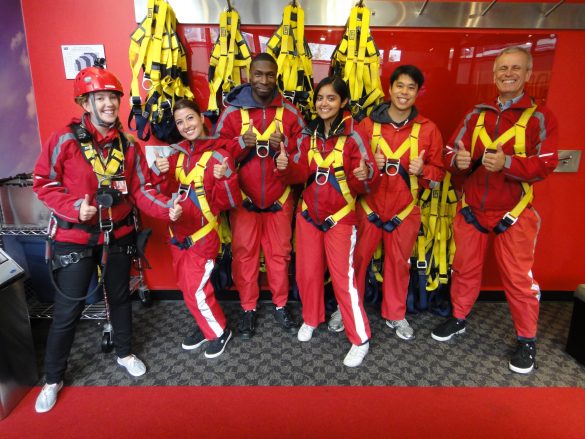 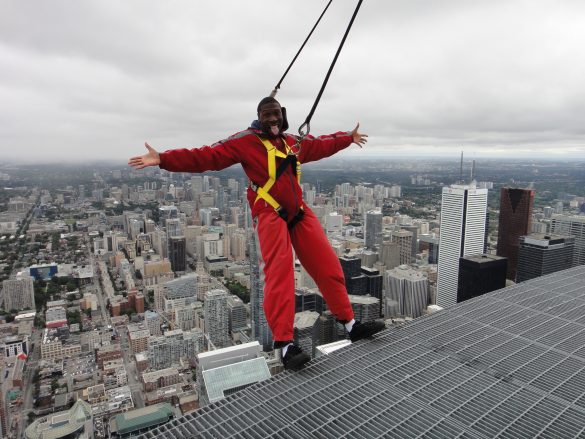 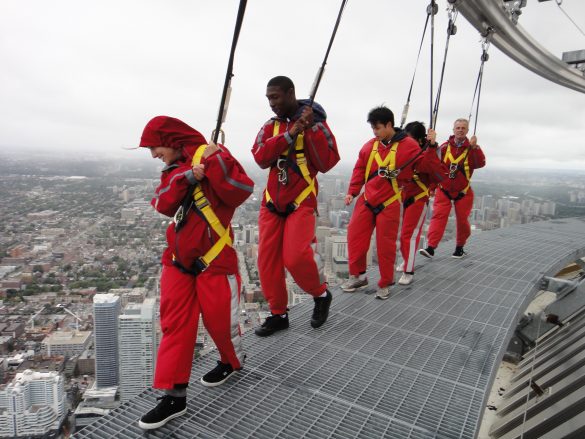 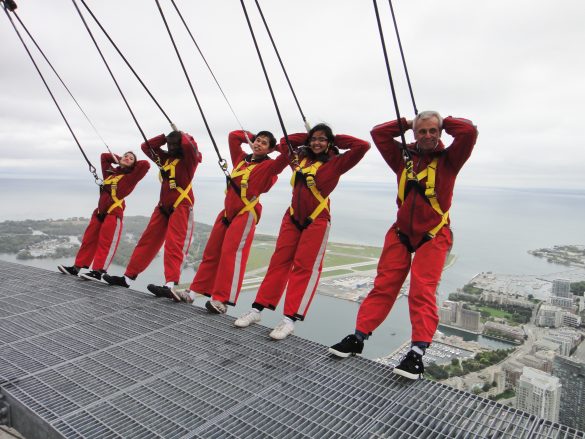 This is on my list too! It’s insane the things that we can do, isn’t it?

If you haven’t done it yet, don’t hesitate. It’s one of the most exhilarating experiences you’ll have in life.

That looks fun but I’m afraid of heights lol 🙂 You guys are so brave!

This is so cool but would scare the heck out of me! How fun to do though!

That looks so much fun. I have seen some videos of it and it looks a bit scary haha.

Oh my goodness, this looks like so much fun! My mom and I love things like this but I would never get my husband out there.

Fun but scary as I am afraid of heights but the photos says it all! Hope one day we could do this as family :-p

Oh, that’s really scary. I don’t think I can do this. I am really scared of heights. You are very brave for trying this

You are super brave. I am super afraid of heights, so I couldn’t do something like that.

This is a thrilling experience! I remember how I jumped off a cliff (under security and supervision, of course) into a river. It was one of the most exciting experiences I’ve ever had!!

I’ve been up the CN Tower but not sure I’d have managed the EdgeWalk… I’m definitely not a big fan of heights!

I’ve done this before, this is so so cool and highly recommended.

I am enjoying this as I know how fulfilling it can be when we cross one of our bucket lists. Thanks for sharing this amazing experience.